Freedom Park, Grassroot and the Campaign for Better Housing

Freedom Park is a township that was built from tents as explained by its pioneers, Thami and Edwin. They were living in Soweto in dilapidated homes and as such they never felt a strong sense of belonging in Soweto. They had noticed that there was an unoccupied piece of land (where there is now Freedom Park) and they decided they were tired of empty promises for houses and they made the courageous choice to occupy the land. Even though they did not have proper equipment to occupy the land, they decided to take what they had, which were plastic tents and create their own homes. However, even though some construction has occurred, with most residents living in four roomed houses, the struggles for land and further construction continues decades after the tents were put up. Their community organization, AbaHlali baseFreedom Park (AbFP), was birthed out of a need for a sense of belonging and solidified identity when people felt that no political party of the time was truly speaking their core struggles.

The following case study was kindly prepared by our grantee, Grassroot about their work with AbFP and is published here with their permission.

The allocation of houses is being undertaken by political affiliation and payment, which means that people who have long since registered for houses are being discarded because they cannot pay or do not know the “correct” people to bribe. As you enter Freedom Park you see these RDP (Reconstruction and Development Programme) houses and one in particular is spray painted and reads ‘corrupt councillors must fall’. This illustration is the literal expression of grief and frustration that the community is experiencing. As Bongani elucidated, the new South Africa did not get time to heal from being “a country at war” and as a result, South Africa continues to be a country at war with itself and, according to him, Freedom Park is a prime example of that and the resulting divisions.

Abahlali baseFreedom Park have been organizing around this issue since at least 2015. Their core demands have been: 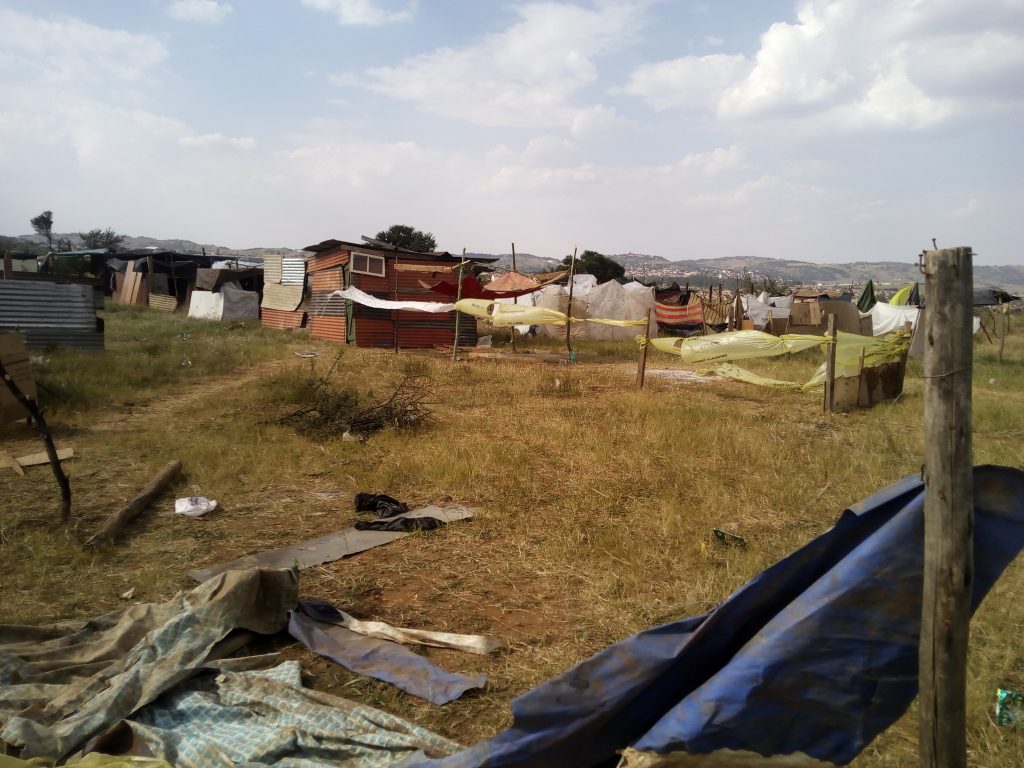 The first issue appeared to see breakthrough in late 2016 when the municipal government (City of Johannesburg) joined the provincial government (Gauteng) in agreeing to the forensic audit. This followed a sustained campaign, organized in large part through Grassroot, including a march on the provincial Premier’s office. The audit was promised to begin in December, 2016. The audit did not occur during December, and was promised to resume in January, 2017. This has still not occurred, and AbFP is planning a series of marches to demand the promises are kept.

Similarly, AbFP has been able to determine that the large piece of public land is municipally owned, but has not received a response on its intended use. They will be conducting an occupation of the land in late March, 2017, to compel a response and engagement from the municipal government. They will also be delivering a formal petition and notice to ANC headquarters at Luthuli House, Johannesburg, as the ward councillor is a member of the ANC.

The third issue has seen tangible progress in the last year, as a new round of a few dozen houses were constructed in response to community pressure. As one of the AbFP leaders put it, “they always respond to pressure, eventually”. The fourth issue, a general shift to greater participation and accountability, does not have a specific milestone. However, the community leaders do report a noted shift in the attitude of government and of entrenched interests: “they take us more seriously now,” they report.

How has Grassroot impacted the community?

Bongani explains that the community has gravitated greatly to the app, because people enjoy the feeling of receiving an SMS inviting them to an event. There’s a personal element and a sense of importance that is bestowed upon the receiver, who perhaps feels insignificant at most times. The feeling of significance underpins the aims of Grassroot, to ensure that individuals who feel undervalued and marginalized by the government and society in general are made to understand their value and worth in contributing to changing the direction of South Africa.

Their interest in attending meetings has greatly increased, although there is no sure-fire way to prove that the app has increased attendance (as registers prior to the app’s introduction were paper based and are often lost). Tshepiso, our Grassroot ambassador, further explains that the app has been entrenched in the culture of community organising in Freedom Park, by highlighting the inquisitive nature of the community members when they do not receive SMSs about meetings. They become worried and always require the matter to be rectified promptly.

As an example in the flesh, reported by Grassroot’s community builder: “One day after a meeting, I asked Bongani if we could take a walk around and see Freedom Park and what it is actually like to live here. As we were strolling through the streets we passed a crèche, where a man was painting the one side of the crèche building where the colour was fading. He called Bongani from across the street, asking him when the next meeting will be. But most importantly he explained that he had heard people had been receiving messages but he was not. He was clearly upset about this, and insisted that he be added to the group, as a member of the community. Bongani excused himself from our conversation and walked over to him to put his add his fellow community member into the group.”

Tshepiso has also explained to me that Grassroot’s impact on the community has been twofold. The first has been that the app has delivered on its promise to reduce the cost and time or organizing. The practicalities of being an organiser in this type of organisation lie in the fact that personal sacrifice in terms of time and finances has to be made. When there has to be a community meeting organised they used two methods to spread the word about the meeting; loud hailing and pamphlets. The pamphlets were easier to make as one of their members had access to printer at work and as they say, they would “abuse his resources”, however the trouble with this was the fact that someone would have travel from Freedom Park to Germiston to collect the pamphlets. The loud hailing was a bit trickier because they would have to spend R250 to pay for petrol along with using the car from 5pm to 8pm. These times were strategically placed for employed community members. Grassroot has entirely removed this cost and time, allowing the existing leaders to channel more of their energy into organizing itself, and reducing the barriers to others participating or even becoming leaders.

Second, and perhaps more importantly but more subtly, Grassroot has helped redress an imbalance and enhance the reputation of Abahlali baseFreedom Park. Although the organisation has had a long history in the community, the community members have always been divided. There have been two main groups, one (AbFP) has been ground-up and unaffiliated, while the other derived from entrenched interests and has been a conduit of patronage and access to resources. Even though the other organisation allegedly uses the strategy of instant gratification by making false promises to community members, they are still supported because of the resources they possess. AbFP on the other hand use a legal strategy that takes longer for changes to occur, from that point people lose interest. But through the use of Grassroot community members can see that the organisation is making an effort to bring new technologies into the community, in turn solidifying their commitment to bettering the community. 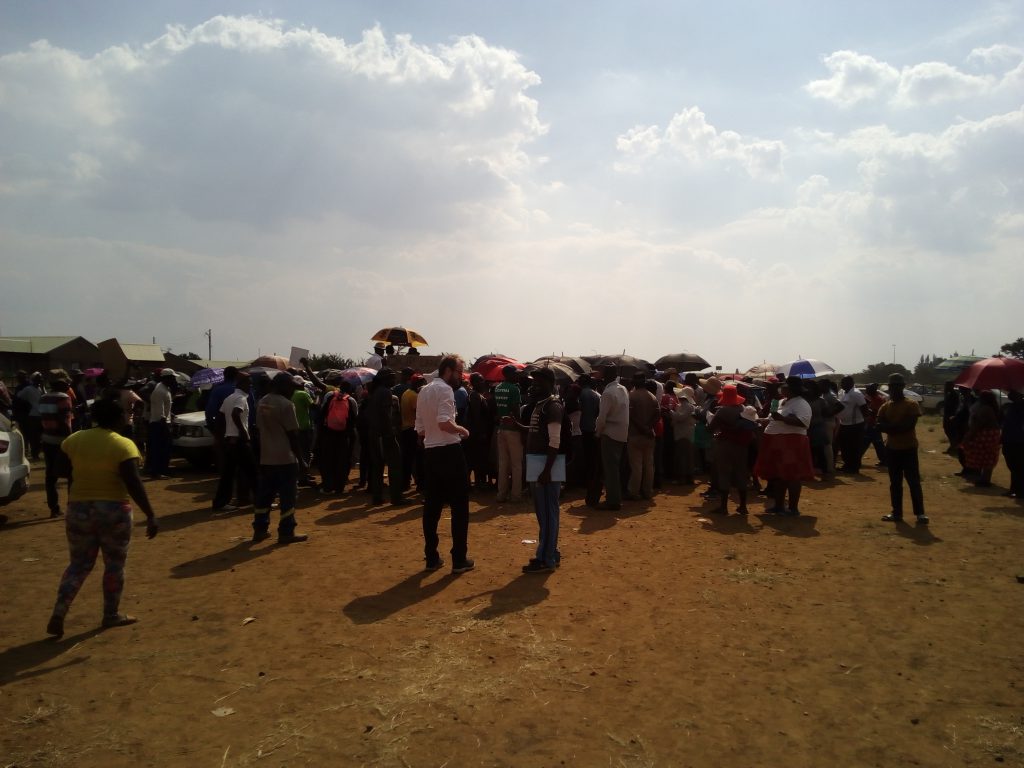