The UK is hosting an anti-corruption summit in 2016.  There are some simple things the summit can aim to achieve that can empower people to detect, prove and tackle corruption on the ground.  In particular the summit could push hard to make available digitally and for free basic laws, budgetary data and company ownership details in countries of concern.  If the UK is serious about this it could deploy British embassies, high commissions etc on the ground to become local in-country hubs of legislative and budgetary transparency, working with local activists to digitise and publish laws and budgets.

At Indigo Trust we support people to improve transparency in their country.  From our grantees, we are conscious that in many countries it is nearly impossible to find out what the current law is, who owns public assets, who owns companies, what public officials are paid and where public money is spent.  Without improving public knowledge of these basic factors tackling corruption is difficult.  In fact it becomes possible only by an elite few with access to special knowledge, limiting the number of useful eyes on the problem.

For instance: a government minister or a judge has a large house, cars, drivers etc and appears to live in some luxury.  What are the absolute basics that say an opposition politician or an aggreived party needs to know to detect whether that person is corrupt or whether the local settlement is that a judge say has a house, a driver, special clothes etc (as they do in the UK) and is highly paid to protect them from being suborned into corruption?  At the very least one needs to know how much public officials are paid, what their budget is, what the law says about their ability to receive gifts, whether they own any companies or physical property and the accounts of those companies.  As well as the general legal framework on corruption (such as common law) and any case law. There are precedents for this sort of work and several examples from around the world. In Argentina, for example, Directorio Legislativo and La Nación have shown how the interests and assets of MPs can be displayed in a standardised, understandable format: 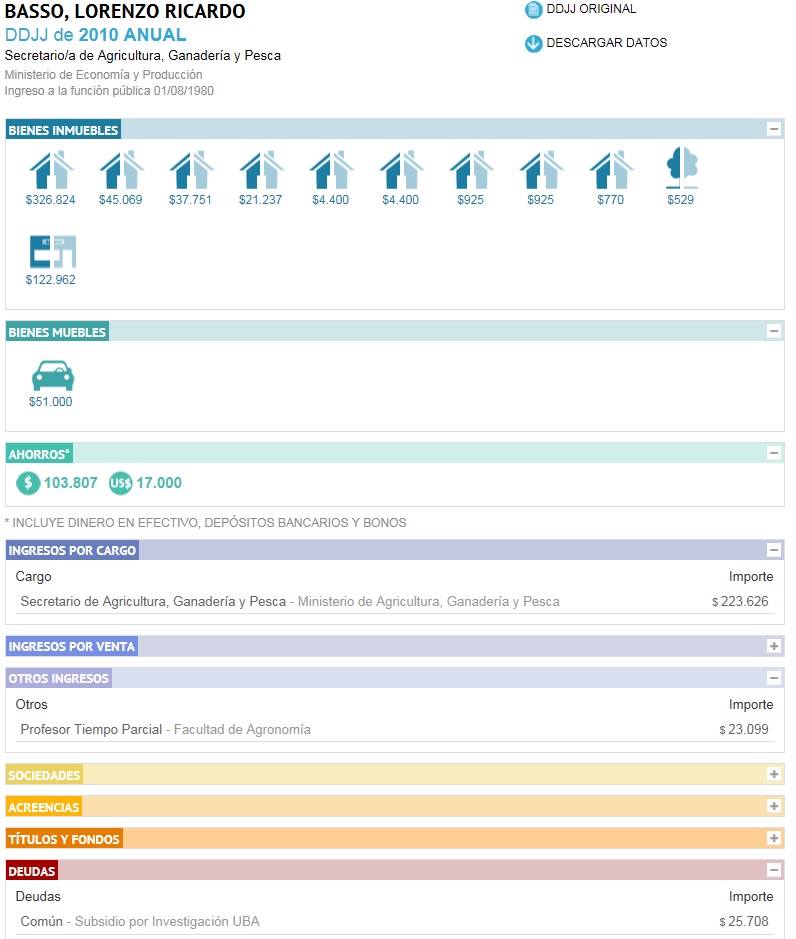 At Indigo we use the concept of the ‘accountability stack‘ to sketch out the basic public information one requires to have a functioning civil society – what the laws are, who holds public office, where money is spent, who owns companies, land etc.  In many countries this information is only available in hard copy in state libraries in capital cities that could be several days journey away.  Once this information is digitized, widespread use of mobile phones means it can be disseminated very widely.   This puts it in to the hands of activists across the country and abroad who could deploy it for good – rather than only having it available to special prosecutors etc.

If the UK is looking for examples of initiatives and organisations doing this work around the world, there are plenty. The 2016 summit offers a chance to highlight some of the many approaches taken by organisations like The Constitute Project or African Legal Information Institutes when it comes to publishing legislation or BudgIT’s efforts in Nigeria to make budget data accessible and understandable.

Publishing laws, budgets, company ownership etc digitally and for free (as open data) is dull, un-glamorous stuff.  In itself such publishing is not sufficient, but it is absolutely necessary to empower activists and bring far more eyes to bear on the problem than any number of high level task forces or Ministerial working groups etc could ever achieve.  Making such information available pervasively also allows it to be deployed in instances too small or obscure to be detected at a national level.

Indeed, the sheer lack of glamour of publishing this information and its indirect route to success could be an asset.  Tackling corruption at an inter governmental level is difficult, not least when you are dealing with corrupt regimes who will pay lip service to keep aid and investment flowing but are unlikely to crack down upon themselves.  It’s possible that basic transparency of the sort we set out above is more a palatable first step to a government with corrupt officials than a more direct route.