Posts about Manchester are few are far between on this blog and for good reason – its relationship to tech for transparency in Africa is tangential at best. Yet the annual Open Data Institute (ODI) Summit, which was held last week in London, has now provided me with the opportunity to talk about some issues and places – air quality, housing and Manchester included – which rarely get a mention on this site. Indeed, one of the strengths of this year’s conference was its focus on issues and topics, rather than the more technical discussions of standards and technologies that can all too often dominate when you put a lot of data and tech enthusiasts together in one place. That’s not to say that standards and technology infrastructure aren’t important – they are the backbone that underlies open data work and without them many of the applications and products I’ll talk about below would be impossible. But as topics for writing about and inspiring people, data standards and infrastructure are a little lacking. It’s like air travel – exotic destinations and gorgeous landscapes inspire people, while only a hardy few are motivated by the fuel efficiency and supreme technical achievements of the plane they used to get there. 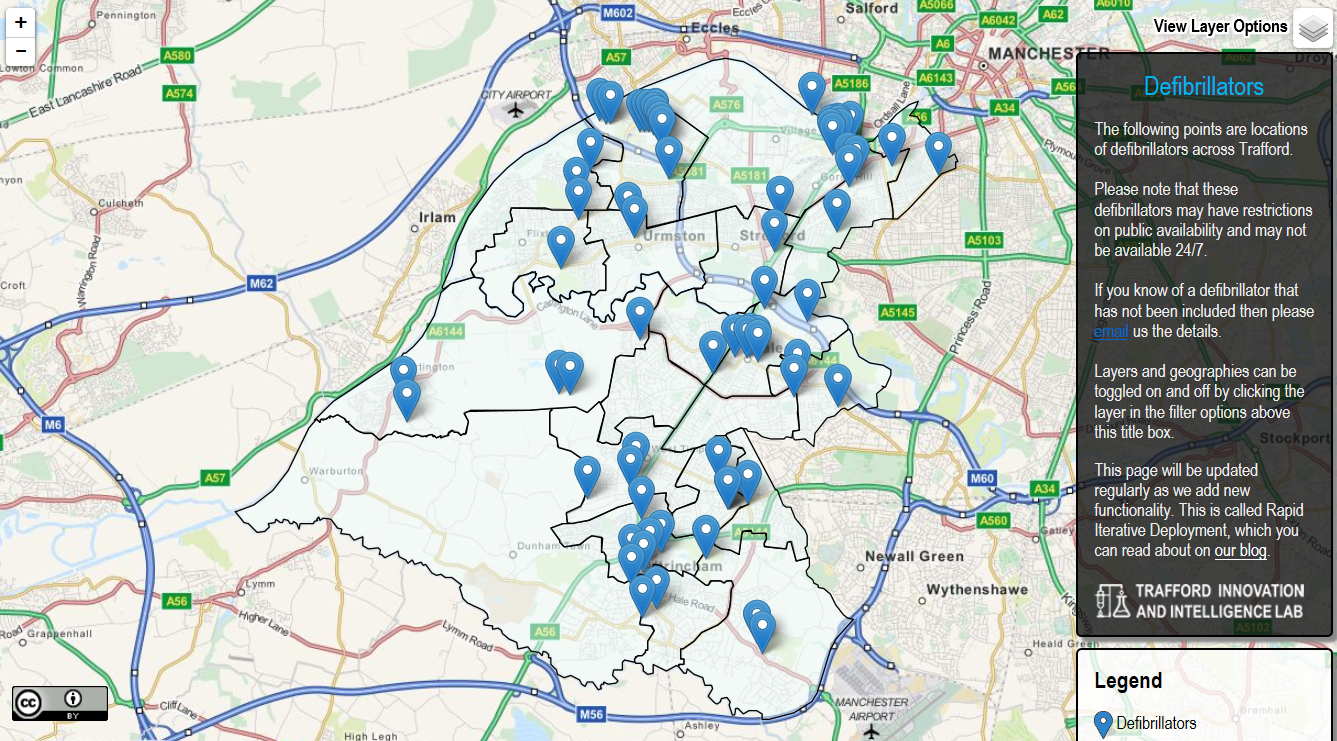 Okay, enough with the dubious travel analogies and on to the actual Summit. Depending on who you hang out with, the term ‘evidence-based policy’ may crop up with lesser or greater frequency. Regardless, the potential of open data to contribute to evidence-based policy is considerable. In Manchester, the Trafford Innovation and Intelligence Lab runs several projects around open data and community engagement. One of those projects concerns defibrillators in their area. Choosing where to place a defibrillator shouldn’t simply be a matter of picking your favourite neighbourhood or selecting somewhere you ‘think’ would benefit from it. Rather, they should be placed where they are needed most and working that out needs data. Trafford’s project combined various datasets on cardiovascular disease rates, existing defibrillator locations, mortality rates, population and demographics and ambulance call-outs to build up a detailed public health picture of the area. Using that data, it was then possible to pinpoint locations where – statistically speaking – defibrillators would most likely be used. This kind of work is a very immediate and understandable use of open data for evidence-based policymaking and is the sort of example that the world of open data enthusiasts need to make the case to policymakers.

At a global level, meanwhile, poor air quality is one of the world’s greatest threats. Responsible for more deaths than HIV/AIDS and malaria combined, it is all too often overlooked or misunderstood by governments and public health agencies. One of the great paradoxes is that air quality is grossly under-measured and under-studied in those areas with the highest levels of air pollution in the world. While comparatively clean cities like London and New York are vigorously monitored and researched, the great air pollution capitals of the world like Patna in India or Khorramabad in Iran largely slip under the radar. There are many reasons why this should be – underinvestment in research, its low priority among governments and donors, lack of awareness… One major problem is the lack of available, standardised data on air quality around the world. While many nations measure it, they may do so using different standards and techniques, meaning that vital comparable, standardised data on which to conduct research is not available. OpenAQ is attempting to change this by building ‘the first open, real-time air quality data hub for the world’ that will provide access to both current and historical data. It’s the kind of tool that if used right, could help researchers and public health organisations make a case for greater research and investment in combating air pollution.

While London and other British cities may have vastly improved air quality in recent decades when it comes to housing it is another story. London has the most overvalued housing stock in the world, new houses are the smallest in Europe and the UK suffers from an ever-widening housing shortage, which pushes up rents and property prices for all. The UK’s housing crisis is evident in the media coverage it receives and the popularity of the topic among the average Brit. One of the many reasons for this housing shortage is the complexity of the issue and the multiple, overlapping authorities, bodies and businesses involved in the provision of housing. The 2015 Connected Housing survey is attempting to bring a degree of coordination to the issue, by pulling together disparate datasets on housing stock, needs, costs and players. Of course, such work is only part of the solution and a truly joined-up, evidence-based policy solution is someway off, but these sorts of initiatives show the potential and scale of open data solutions to real world problems.

Aside from its potential to create viable solutions to problems both large and small, one of the great strengths of open data is its potential to democratise policymaking. Whereas closed data remains available for scrutiny by only a handful of policymakers, open data – such as that highlighted in these examples – opens up the world of policymaking to civil society, individuals and concerned citizens. While it would be wrong to assume that this would always lead to better outcomes or overcome the problems of power and representation that affect all social change endeavours, it is fair to say that by widening the space for debate, open data also widens the space for solutions. The intelligent use of open data by civil society can be a valuable tool for all sorts of sectors and problems and the kinds of real world examples outlined above are a necessary starting step.