The following post has been kindly prepared by Nicholas Dykes, cataloguer at the British Library’s War Office Archive. The post relates to work funded by Indigo to conserve, catalogue, digitally capture and publish a number of maps and pages of text relating to the former East Africa Protectorate, Uganda and Colony of Kenya. It is the second in a series of posts aimed at explaining the work and revealing the stories told by the maps and documents. It is hoped that these historical artefacts can be used by historians, scientists studying climate change, population movements, land use, governments and others to study the sometimes brutal nature and operation of British colonialism during the late 19th and early 20th centuries.

The recent attack by al-Shabab gunmen on a university in Garissa, north-eastern Kenya, demonstrates the threat still posed by the group, despite its losing control of the main cities and ports in Somalia. Conventional military tactics have generally proven ineffective against them, as they melt away and blend into the civilian population, before re-grouping to strike, as one BBC article put it ‘like mosquitoes in the night’.

Two sheets in the War Office Archive reveal the use of similar, light-footed tactics, albeit in a very different scenario, against British military forces there over 100 years ago. 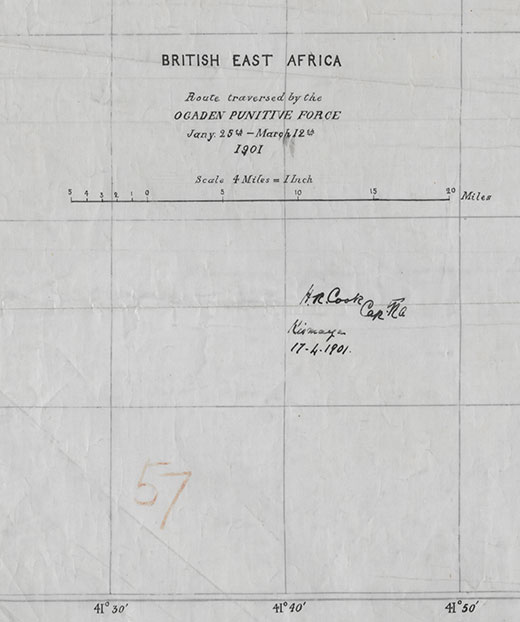 In November 1900 the British Sub-Commissioner in Jubaland, Arthur Jenner, was killed while making a tour of the interior through areas inhabited by the nomadic Ogaden tribe. This part of southern Somalia was at that time under British administration within the East Africa Protectorate, and had in the preceding months been largely peaceful – Jenner was travelling with only a light escort, and was probably killed at the instigation of an Ogaden chief whom he had previously detained on suspicion of the murder of Somali policemen. According to one contemporary account, ‘It was well known that [the] murder was due to personal motives and should not have been treated as a political revolt’. However, a caravan of local traders had also recently been attacked, and shortly afterwards a report was sent back to London suggesting the imminent uprising of the whole Ogaden tribe. 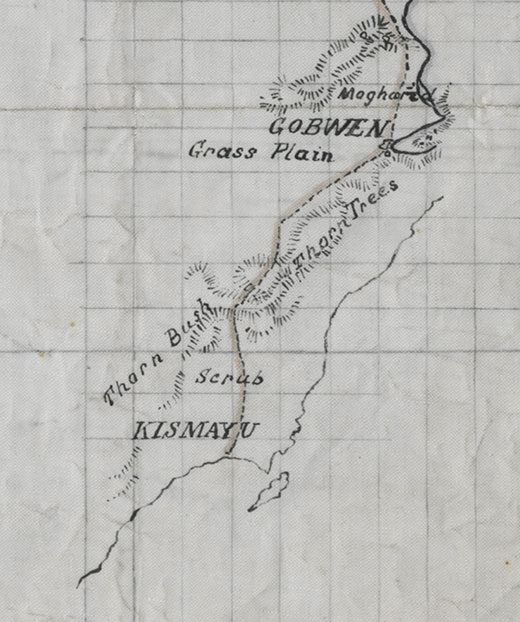 By January 1901 a force of 600 troops, the Ogaden Punitive Force, had assembled at Kismayu on the Somali coast with a transport of 590 camels, around 900 porters and a number of carts, donkeys and oxen. A plan of Kismayu shows new infrastructure put in place in advance of their arrival. The official report states:

‘Preparations for the expedition were now hurried on… A trolley line 1,200 yards long was laid down from the pier to the town, where two sheds were prepared for the storage of rations, etc. The water supply was improved and extra wells were dug for the large number of transport animals which were expected… The defences of the town were at the same time strengthened and a hospital was established.’ 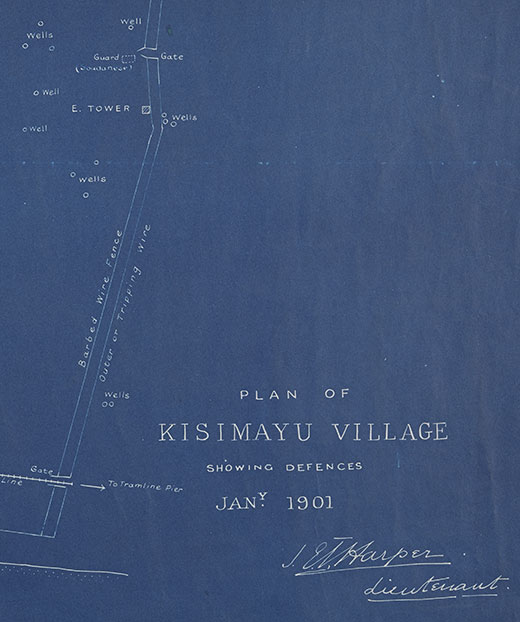 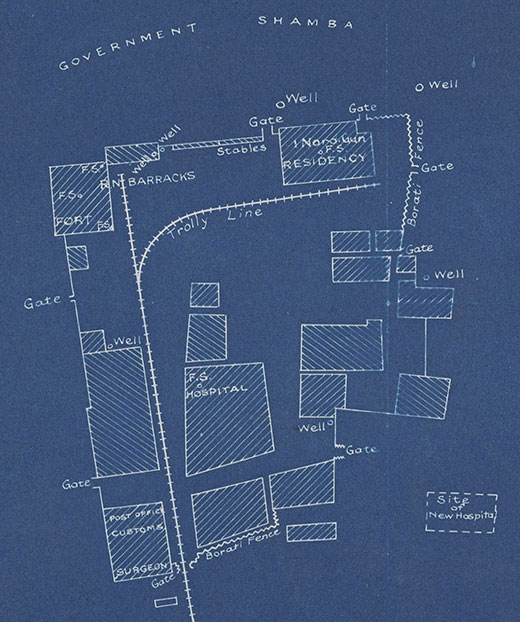 The troops marched inland from Kismayu across hostile terrain – labels indicating ‘Thick Bush’, ‘Dense Thorn’, ‘Very dense Thorn’, and the description ‘Dry’ pepper the expedition map – as far as Afmadu, where the Ogaden Sultan was quickly captured and sent down to the coast. From there a flying column of almost 400 men continued into unknown territory to the north-west, where the chiefs linked to Jenner’s murder were said to be. 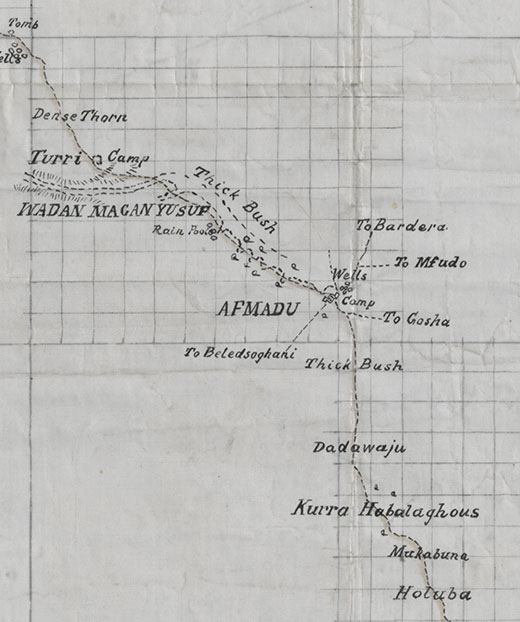 For days as they advanced the troops saw fresh tracks around them in the sand, but at no point did they see the enemy they knew was there. Eventually, at a place on the map marked ‘Samasa’, they halted to make a reconnaissance, and even as they pitched camp a force of Ogaden militia rushed from the surrounding bush. 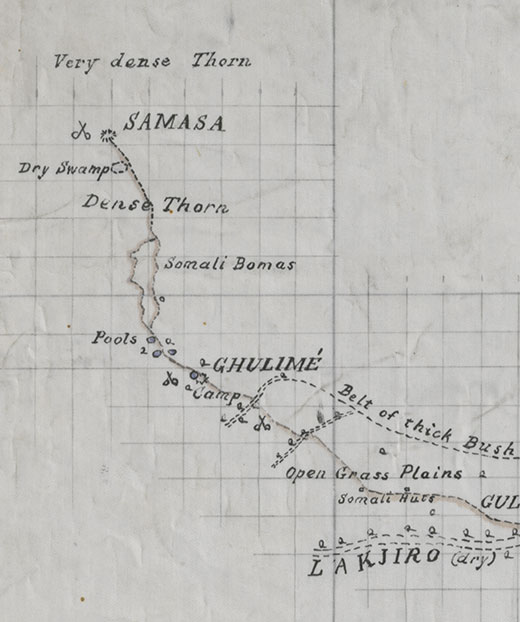 The attack was repelled, but the British beat a retreat; first to Afmadu, accompanied by the Ogaden militia at a distance and from there back to Kismayu, where they arrived on 12 March.

Three months later the Ogaden Punitive Force relinquished its activities and left the area, after the captured Sultan ‘promised on behalf of the tribe to pay a fine of 5,000 cattle and to do his best to obtain the surrender of Mr Jenner’s murderers’.

But back in London the expedition was considered a fiasco. Commenting on the difficulty of making war in this terrain against such nimble opponents, the Commissioner of the East Africa Protectorate, Sir Charles Eliot, declared, ‘If our officers will avoid getting murdered in future we had better let the Somali alone, and avoid such conflicts between a lion and a swallow.’

The British East Africa portion of the War Office Archive is being conserved, catalogued and digitised with generous funding from the Indigo Trust.

Frontier and Overseas Expeditions from India, Compiled in the Intelligence Branch Division of the Chief of the Staff Army Head Quarters India, Vol. 6, 1911

H.R. Tate, Some Early Reminiscences of a Transport Officer: Ashanti Field Force and Ogaden Punitive Force, in Journal of the Royal African Society, Vol 41, No. 163, April 1942 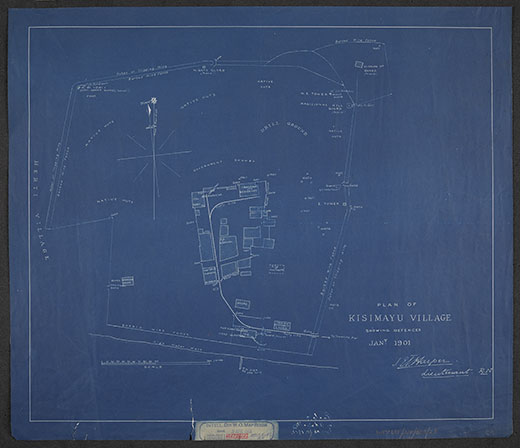 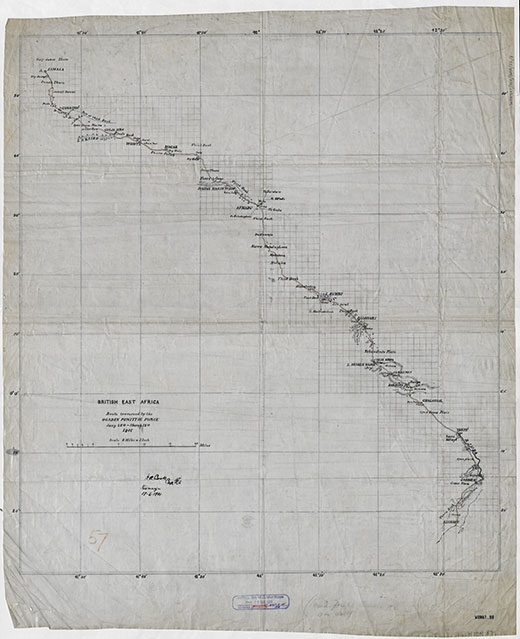