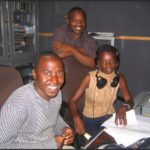 On the 12th June, FrontlineSMS launched Version 2 of their award-winning open source software, which enables users to send and receive text messages with large groups of people without requiring Internet access.

Indigo Trust have been following the progress of FrontlineSMS, having  awarded them two grants in 2011, totalling £20,000, to provide funding for a part-time manager and to assist with a pilot with community radio stations.

FrontlineSMS founder, Ken Banks, envisioned the software, six and a half years ago as a means to harness the power of mobile to lower barriers to social change. Since then, their open-source SMS-messaging software has been downloaded over 25,000 times, and helps organizations in over 80 countries to overcome their communication challenges to reach millions.

Over the past two years, FrontlineSMS has focused on gathering user feedback and learning from their work with organisations using the software to generate new designs and ideas.  In collaboration with Gabe White, a Kampala-based user experience designer, they have redesigned the software to be more intuitive, simpler to extend and run over networks, and have also made it easier to manage larger volumes of messages. After many months of building and testing they have now released FrontlineSMS Version 2  – to better serve the needs of its community and ensure FrontlineSMS is well-positioned for a multi-channel, global mobile future. As Version 2 starts to make its way in the world – it has already been in use in radio stations in Africa.

What’s different about the new platform – FrontlineSMS Version 2 makes it easier to create and manage common SMS activities like making announcements, conducting polls and automating replies to incoming SMS. The polls activity visualizes incoming data, allowing you to quickly understand the results. You can manage messages more easily with a flexible filing system, featuring folders and an archive capability; as well as an inbox, outbox, and the ability to monitor pending messages. Important messages can be starred for later, and a more robust search allows you to locate messages based on name, location, or date as well as by activity, group and folder. You can export your messages limited by date range, or from any search result, collection of messages or group of contacts.

The architecture of the new software makes it stronger and more flexible, allowing developers and users to customize FrontlineSMS to better meet their needs, and integrate it with other platforms and systems. Browser-based and built to run on Windows, Mac and Linux, FrontlineSMS still does not need the Internet to work, sending text messages via a phone or GSM modem. Online SMS aggregators Clickatell and IntelliSMS are already built-in, for those with a web connection, and more services will follow in the months to come.

FrontlineSMS will continue to build on the core, stand-alone software, adding new features, many of which will be new ‘activities’, in the language of Version 2; adding integrations with additional web-based SMS services; and taking a fresh look at critical functionality such as how FrontlineSMS deals with forms-based data collection. Also on the map for later this year is a web-based test platform, which is a first exciting step to a more varied menu of hosting options for its users.

You can now download the software, find out more about it, and access screencasts and explanations of the new functionality on their website. Information about how Version 1 will be supported going forward, and about the timetable for putting remaining Version 1 functionality onto Version 2 will also be available via their website.

· In Benin, Plan International, a global organization dedicated to improving the lives of children, integrated FrontlineSMS into their work on violence tracking.

· In Cambodia, village health workers use FrontlineSMS in their villages, helping to contain the spread of malaria

· FrontlineSMS is being used in Northern Kenya for combating food security through the sending of weekly information about livestock and food commodity prices to field workers in rural communities.

FrontlineSMS is regularly included in academic papers and international reports on the role of mobile technology in the development sector.   Published articles are: Mobile Technology and the Last Mile: “Reluctant Innovation” and FrontlineSMS (MIT Press, January 2011) and Crowdsourcing for Crisis Mapping in Haiti (MIT Press, Fall 2010).

FrontlineSMS was short listed in the Mobile Messaging Awards 2007, named WSIS “ICT Success Story of the Month” for its use in monitoring the 2007 Nigerian elections, was a finalist in the Stockholm Challenge 2008 and won a prestigious Silicon Valley “Tech Award” in 2009. In 2011, FrontlineSMS won the Curry Stone Design Award for social design pioneers.